Yes. That’s the new number. Seven billion. And counting. Never more than now was there such convincing evidence we live in a big fat global village. Every time a fairy shakes a leaf or taps a rock the fanned rumble is felt across the bottoms of every caterpillar across earth. We are that close – like it or not – that intricately interconnected. Yes. We live in one big fat rumble. Ai-yai-yai!

There! Did you feel that?

The moment is ripe again. That moment reminiscent of Christopher Columbus, Marco Polo, Amerigo Vespucci, Vasco da Gama, Ferdinand Magellan and the rest of that restless lot, who venturing in search of what lies beyond stumbled into earthy aliens – savages, they called them. Hmm?

Well-well! Some might say today’s smarties have discovered as much savagery, if not more, in the souls of roving conquerors. Some might even have found wizards to be right – Aha! – finding in them all the drums of that eternal echo: never a conquer true, always a trap; trapped behind the gorge – savages eating savages to the full fat. Hmm? Wizards speak funny.

Be it so or not, the moment is ripe again. We’re feeling the itch. Onto a new frontier! Off to new worlds! What lies behind? What lies beneath? What lies beyond? But this time advancing smarter? Wiser? More enlightened?

To which world shall we venture? That far earth? A thousand fold scattered. That inner earth? So teensy-bittsy told. Serious matter. There is much more to discover.

You, off into the heart of divinity. You, off into dark energy. You! To that new universe – packed with supernatural worlds – the fertile land of literature, their scary skies teeming with monsters – the realm of angels. I say aye! Aye! Aye! Aye!

So we journey. Following you.

Two brothers, Sam and Dean Winchester, bound by tragedy, travel across the country on a mission. They encounter terrifying and dangerous forces. They hunt monsters.

This haunting series on The CW has an incredibly impressive fan base. SUPERNATURAL is up for two People’s Choice Awards: Favorite Sci-Fi/Fantasy Show and Favorite Network TV Drama. Well wishes fan out. Oy-oy-oy!

The realm of supernatural is not restricted to TV land; it extends far beyond, across and through our iPhones, iPads, Nooks, Kindles and favorite digital devices in A Sound Byte Life as well as in Flight Of The Fused Monkeys. Enjoy. Live. Laugh. Love. Seek. Re-discover. Here, a young soldier, Baba, bound for A Place Called Ah, determined to find the mysterious Blue Stone, determined to avenge his truth, determined to find his Gra’Pa, must of necessity cross chasms, battle monsters, and conquer fears. 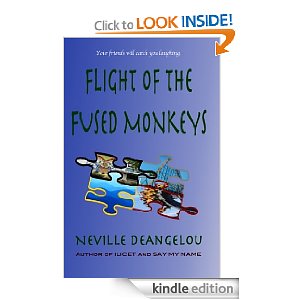 Oh! And there discover – as only the fool never does – that freedom will never continually remain bound, restrained or asleep, and waking does not shake free of its shackles, rather yanks those chains, ripping the very foundations to which they are anchored then flies above the burying rubble, and the rumble is heard far and wide. It will never be any other way. Freedom knows every tyrant, every bully, every monster – variants of the same cheat – has only one weapon: a dare! The tyrant, by whatever disguise, dares freedom to exist chained or risk being to be free. It’s a dare. Always a dare. The bound must choose, for it is the bound that was netted whilst asleep.

This site uses Akismet to reduce spam. Learn how your comment data is processed.

Memoir: Journey Through The City Of Gold